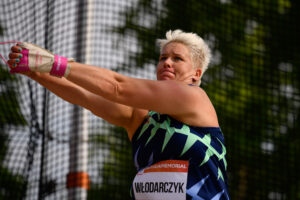 After three rounds Kozul and Irina Klymets were eliminated and the best eight athletes continued. Among those were Hungarian Réka Gyurátz (64.12, 67.26, 69.80) and two-time Olympic Champion Anita Wlodarczyk (74.76).

Tavernier threw 74.69 metres on his last attempt which made it clear that the crowd will witness a Polish victory. Since Kopron finished her series with 74.02, Anita Wlodarczyk took home gold in the opening event beating Tavernier by seven centimetres, while Kopron took home the bronze medal. Hungarian Réka Gyurátz (69.80) finished fifth.

The men’s event began with Valeriy Pronkin’s 72.64, while Bence Pásztor opened with 69.48 and winner of the Tatabánya Grand Prix Taylor Campbell began the event with 71.80 metres. Dániel Rába took the lead with 74.56 for a few minutes, but Ukrainian Mykhaylo Kokhan quickly jumped to the front of the queue (78.50). Wojciech Nowicki also opened with a strong 77.29 metres while his compatriot Pawel Fajdek started with 76.19. Marcel Lomnicky, Eivind Henriksen and Bence Halász did not register a valid throw in the first round. 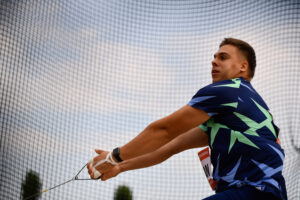 The fourth round saw Kokhan break his personal record (80.78) which earned him the lead. Nobody has ever achieved such a good result at only 20 years of age.

The event will continue on Tuesday.