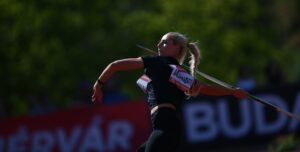 Anna Bogdán’s attempt in the women’s javelin throw kicked off the second day of the 2021 Gyulai István Memorial – Hungarian Grand Prix in Székesfehérvár. The Hungarian crowd witnessed the first meet record of the day when Elizabeth Gleadle threw 61.90 in the first round. The record did not stand for long as Nikola Ogrodnikova threw 62.20 metres in the second and 62.56 in the third round.

In the meantime, the heats of the ’How fast you run the 100 metres?’ took place. Sofia Emmanuel (13.67) won the beginner women’s race, Balázs Zsolnai (13.00) prevailed in the men’s beginner category, while his brother, Bálint Zsolnai (11.83) won in the advanced category. 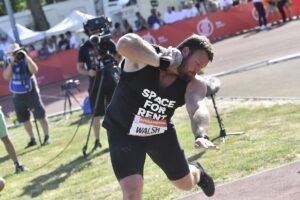 The first heat of the men’s 100 metres national competition was won hy Patrik Bondschu (11.20 PB), while Illovszky Dominik (10.70) prevailed in the second heat.

Jamaikan Elaine Thompson-Herah (10.71) was unstoppable in the women’s 100 metres as she beat Fraser-Pryce and Ta Lou for the gold medal. 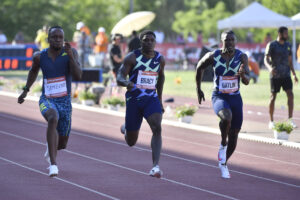 Akani Simbine was fantastic in the men’s race – he clocked a new meet record (9.84 PB) getting the better of Michael Rodgers (10.00) and Marvin Bracy (10.12). Gemili came in fifth while Gatlin finished sixth in the wonderful competition.

The 100 metres hurdles ended in Puerto Rican victory as Camacho-Quinn was faster than everyone else. Herman (12.67) came in second, Cunningham (12.75) came in third while Hungarian favourite Luca Kozák (12.85) finished seventh.

Femke Bol emerged victorious in the women’s 400 metres hurdles with a 52.81 meet record, though she had to suffer for the win in the home stretch as Little (52.85) was closing in on her. Russel from Jamaica came in third. 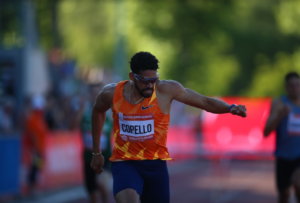 There were two heats in the 110 metres hurdles – the first was won by Paolo Dal Molin (13.31) even though he touched or tipped over most of the hurdles. David King (13.31) finished second, Freddie Crittenden (13.49) finished third while Hungarian Bálint Szeles (13.88) came in seventh beating African Champion Antonio Alkana (13.98). 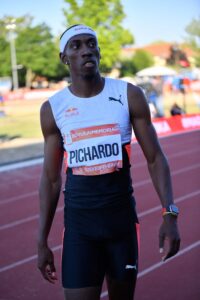 Portuguese Pedro Pichardo started the triple jump with a world leading (17.82) which is a new meet record. Hugues Fabrice Zango also started brightly matching Picardo’s result which is his personal best and an African record as well. The answer soon came from Pichardo who jumped 17.92 beating the meet record once more. Zango could not overcome this and finished second while Triki (17.33) from Algeria took home bronze.

The crowd also witnessed a meet record in the 3000 metres as Muktar Edris set a new personal record with 7:30.96 which is the third best time of the year in this distance. His compatriots Worku (7:34.75) and Yihune (7:39.27) finished second and third respectively. 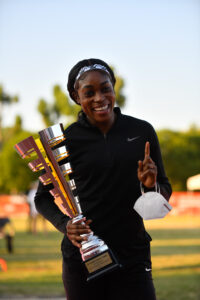 The Dr. Spiriev Bojidar Trophy went to Elaine Thompson-Herah, winner of the 100 metres while the best Hungarian was Luza Kozák.

The athletes collectively achieved 93418 points which means that the Gyulai István Memorial was 2021’s most successful competition. What a fantastic afternoon!