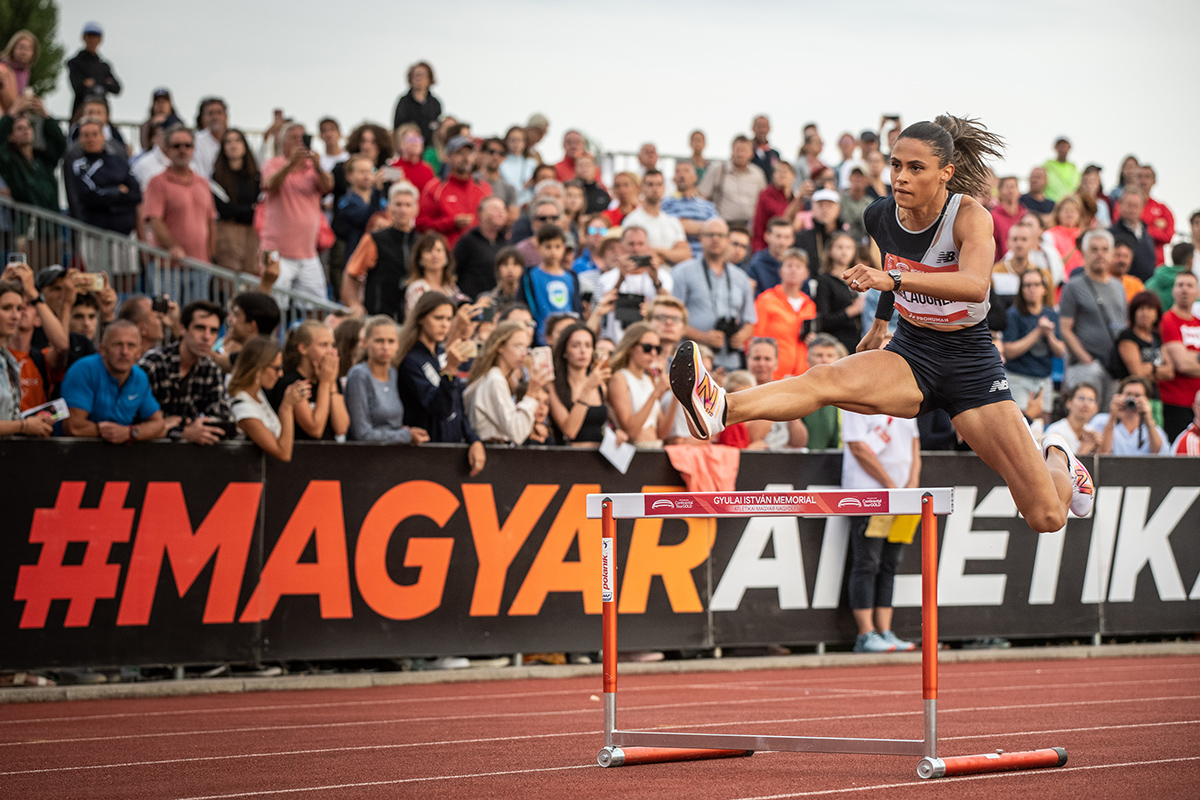 The 2022 Gyulai István Memorial – Hungarian Athletics Grand Prix has been a huge success with both the public and the professionals. The most prestigious Hungarian athletics competition took place in front of a full house, with record number of Hungarian participants, a star parade and seven new records. The atmosphere of the competition will remain in the hearts of the athletics-loving public.

With one year to go until the 2023 World Championships in Budapest, the organisers wanted to showcase as many world-class athletes as possible to the Hungarian public, who will dazzle us next year between 19 and 27 August.

The sold-out competition proved that there is a huge demand for athletics in Hungary.

“The most important result of this year’s Gyulai István Memorial was that everyone could see for themselves how strong athletics is and how strong Hungarian athletics is. We were able to organise a competition with the biggest world stars in the sport, with a record number of Hungarian athletes, in front of a wonderful audience, in a sold-out stadium.” – said Péter Deutsch, chairman of the organising committee. “Székesfehérvár has been an excellent home for the event for nine years, but the venue has really outgrown, the interest of the public and the press, including international media, and the TV coverage requires a more spacious venue. We have achieved the goal we set ourselves 11 years ago. We said, and it became our slogan, that The Legend will continue. We have succeeded in making this wonderful sport popular again and in showing the strength of Hungarian athletics, the athletes, the professional staff and the competition team,” he added.

Swedish world star Armand Duplantis attracted the greatest attention, not only the stands but also the grassy areas next to the track were completely full near the pole vault.

The world record holder was hampered by the swirling wind, but still amazed the spectators with his effortless and beautiful leap in one of the most difficult events in athletics. Even though the wind prevented him from clearing the 6.01m height, he still won with a fantastic 5.80m.

Alongside Duplantis, the new queen of the sport, Sydney McLaughlin, and legendary Jamaican sprinter Shelly-Ann Fraser-Pryce were crowd favourites. McLaughlin, celebrating her 23rd birthday, was competing in Europe again after three years and immediately achieved a result in the 400m hurdles that no one in Europe had ever done before. Her time of 51.68 seconds was also the sixth fastest ever run in the world.

Five-time world champion in women’s 100m Fraser-Pryce was in Székesfehérvár last year, but she was beaten by Elaine Thompson-Herah. This time, the 35-year-old sprinter could tick the Gyulai István Memorial off her list of missing victories. Like Duplantis and McLaughlin, she did so with a competition record of 10.67 seconds. It was exactly the same result that made her world champion two weeks ago in Oregon.

We saw the only 18-year-old Erriyon Knighton, still considered the new Usain Bolt, run 19.88 in the 200m. We saw Kristjan Ceh, who looks like Superman with his thick-rimmed glasses, fly the discus over 70 metres. In the women’s 800m it was Ethiopian Diribe Welteji who improved her Memorial record to 1:59.33.

In the shot put Joe Kovacs, of Hungarian descent, was seen celebrating his amazing 22.89m performance with two souvenir rompers in Hungarian and American colours. “Believe me, my wife is expecting twins, not me,” said the two-time world champion jokingly, suggesting that his physique might lead some to believe otherwise.

Duplantis, McLaughlin, Fraser-Pryce, Knighton, Ceh, Welteji, Kovacs – seven world stars who have written themselves into the Memorial history books by setting a record in the competition. They could have been joined by Jasmine Camacho-Quinn in the 100m hurdles, but due to too much tailwind, her 12.27 second feat was ultimately disallowed.

Also very popular in Hungary is Gianmarco Tamberi, who scored his first Memorial victory in the high jump while he was still suffering from covid a few days ago. The Italian Olympic champion showman was not allowed to compete by his crew firstly, but he didn’t want to miss out on one of his favourite competitions. Olympic and world champion hurdler Grant Holloway lost the 110m hurdles in the final metres, but he still loves the race, and he even said that Székesfehérvár is his second home, as he first competed here in a professional race in 2019. Shericka Jackson’s name is not to be missed either, she defended her title in Székesfehérvár as the second female sprinter of all time in the 200m, and world champion.

As well as showcasing the stars, it was equally important for the organisers to give as many Hungarian athletes as possible the opportunity to compete in a strong field a year before the World Championships in Budapest.

Bence Halász threw even better than five-time world champion Pawel Fajdek in the hammer throw and finished 2nd, Réka Szilágyi, who achieved her best throw this year, finished 3rd in the javelin throw, Zoltán Wahl ran a lifetime best in the 200 m (21.08) and Attila Molnár set a new personal best in the 400 m (46.75). These two have also been part of the 4×400 m relay team that set the Hungarian U23 men’s record recently and they will be in top form at the European Championships in Munich, where they will compete in the adult competition.

Another memorable moment of the Memorial was when the international and Hungarian queens of the 400 m hurdles and 100 m run embraced each other after crossing the finish line. For Janka Molnár, Sydney McLaughlin and for Boglárka Takács, Shelly-Ann Fraser-Pryce will be the big etalon.

Next year the event will be hosted by the National Athletics Centre in Budapest as a test event for the 2023 World Athletics Championships.

The Legend continues in 2023, now in Budapest!