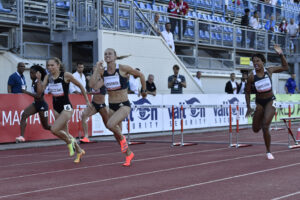 – Congratulations! Despite the fact that the global pandemic caused massive difficulties in sport all over the world, including track & field, you closed a quite impressive year.

– Thank you! Because of Luca’s injury last year, we weren’t able to do everything we wanted in 2019. This year, we put work into the preparation in a different way. We were constantly preparing for the Olympics, and after it was postponed, we set a new goal and that was the European Championships. We did the work what we planned even without having a single training camp.

– The results already at the beginning of the year showed that the preparation was successful, as – in February – Luca run 7.97s in Poland, Torun and the at the Indoor National Championships on 60 hurdles.

– Back then, we planned that we would either have to reach the entry standard for Tokyo or collect enough world ranking points for the Olympic start. We pondered that we would only compete in the Indoor World Championships if Luca was in such a shape that she could be in the top ten in the rankings. The it came out the Nanjing organizers announced that they would postpone the World Championships until 2021. 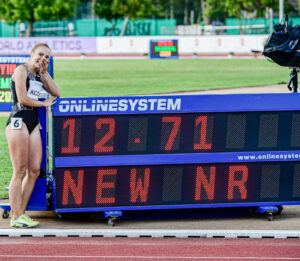 – How much did it interfere with the preparations that three world competitions were not held in 2020?

– As one was delayed, we immediately started focusing on the next one, and so on. Then, when it turned out that they were all postponed, we started to concentrate on the 2021 season because we definitely need to be in Tokyo. We usually plan for longer terms with Luca because she is mentally very strong. She doesn’t really care about the negative circumstances; she can pass them and look for the future with me.

– With the delay and postponement of the world competitions, this year’s Gyulai István Memorial – Hungarian Athletics Grand Prix became more valuable. How did you prepare for it, knowing the fact that you can’t get a quota until December?

– Last year, in Doha, at the World Championships she was not yet 100%. Two weeks before that, his legs were still injured, and for a long time – since 2013 – it was the first year she hadn’t run a personal record. This built a strong motivation in her for 2020. We are stubborn people, so we decided to run a personal record regardless of the circumstances, the epidemic, the preparation difficulties. We had three exact competitions: the Torun competition, the National Championship and the Hungarian Athletics Grand Prix. We knew for sure that they were being organized. 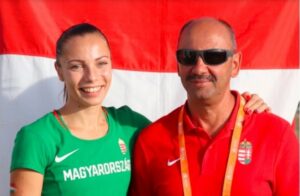 – When, on the evening of August 19, around at 18:15pm, at the end of the final of the 100m H the stopwatch stopped at the Bregyó-közi Regionális Atlétikai Centrumban, did you feel that something big had happened here?

– I usually stand at the start because we always look at each other with Luca one last time before that. I looked at the finish on the big screen and felt it was a close one. We would not have thought in our dreams that it would be 12.71s. We wanted to run better than 12.83, that was the goal and we succeeded. It also proves that we need to move on with the work we have done so far. The mentality should not be changed either. We want to stabilize the runs within 12.80, and so our next goal can be achieved.

– Looking back on the run – now with calm mind – how did you like it?

– There was a mistake in it. During the race, stepping off one of the hurdles was not as dynamic as it should had been, and coming down from the tenth hurdle, Luca pushed herself very forward, not keeping up her usual running rhythm. Apparently he saw Visser next to her and the clock. So there is something to fix in the future.

– We are very confident that in 2021 there will be an Olympics, in what conditions, is another topic. We will continue the work we have started. We plan to get in shape for the Indoor European Championships in March, we would like to reach as soon as possible the entry standard for Tokyo. In Japan the target is a new personal record and will see what will it be enough for…